Skip to content
Login
by: ZIva Vovk
Published on the platform: September 10, 2019

Slovenian municipal or local energy policy is based on a strategic document called Local Energy Concept (LEK). LEK is the most important tool for planning a long-term local energy policy strategy, because it encompasses ways in which local communities can tailor solutions for efficient, economical and environmentally friendly energy services in homes, businesses and public institutions. The document also lists the concrete effects that the local community can achieve by carrying out activities and measures from the LEK. Based on LEK, the spatial and economic development of the local community is planned, the development of local energy utilities, the efficient use of energy and its saving, the use of renewable energy sources and the improvement of air quality in the local community.

Creation of LEK is based on the methodology defined in the Rules on the methodology and the obligatory contents of the local energy concept (Official Gazette of RS, no. 56/16 ). The objectives and measures defined in LEK must be in accordance with the Energy Concept of Slovenia (EKS) and other action plans and operational programs for the supply and use of energy, namely:

All national plans must comply with European directives, among them Directive 2012/27/ EU on energy efficiency, Directive 2010/31/EU on the energy performance of buildings and Directive 2009/28 / EC on the promotion of the use of energy from renewable sources and other relevant directives.

In IMEAS project several guidelines and operational tools were developed to improve the capacity of administrations, agencies and other institutions to plan integrated and sustainable energy policies. Slovenian project partners KSSENA and Municipality of Celje tested several tools while developing Local energy concept (LEK) for Celje with the aim to determine the biggest obstacles and deficiencies, that still need to be tackled in energy planning processes on a local level. 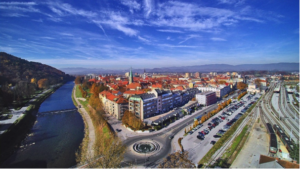 Celje is the third largest city in Slovenia with around 49.000 inhabitants. Unfortunately Municipality of Celje deals with a heavily polluted air, which is a result of several factors, such as industrial activity, heavy transit traffic, high number of individual heating systems, that are old and inefficient, unfortunate climate conditions in connection to its location (Celje is situated in the valley, resulting in lack of wind and temperature inversion) and most of the building stock being old and energy inefficient. Developing LEK would address Celje‘s need to reduce energy consumption and CO2 emissions and to increase the use of RES. Consequently this would improve the overall air quality.

Development of LEK Celje begun in September 2018 and was finished in February 2019. To bring LEK into realization a long period of data collection and analysing was needed, that included several stakeholders. KSSENA and Municipality of Celje collected data from different databases and sources, namely from Statistical office of Republic of Slovenia (independent government service, national agency), Slovenian environment agency (national agency operating under Ministry of the environment and spatial planning), Municipality association of Slovenia, from municipal databases, databases of sectoral agencies and regional energy agencies, private and public company databases (companies that are energy consumers, and companies that are energy providers) and last but not least from KSSENA‘s own sources (surveys, measurements, fieldwork).

Based on collected data Celje’s energy profile was created and determined, that overall energy consumption in municipality of Celje amounts to 1.489.519 MWh/a, and CO2 emissions to 375.299.650 kg annually. Local energy concept thus suggested more than 30 measures to be implemented in the following period, with the aim to reduce energy use and CO2 emissions, among them connecting individual households to district heating system, energy refurbishment of public buildings , renovation of public lighting system, building of new traffic infrastructure for transit traffic, encouraging environmentally friendly public transport (buses on natural gas), increasing the use of RES, implementation of better energy management, encouraging implementation of energy audits and energy bookkeeping in companies etc. The expected output of successfully implemented measures is estimated to be:

While developing LEK (with support of IMEAS tools), KSSENA and Municipality of Celje were able to point out major weaknesses and deficiencies in preparing energy strategies on a local level in Slovenia: 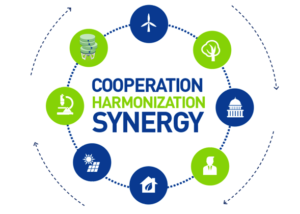 Slovenia is not the only country dealing with lack of capacity, alignment and poor information flow. IMEAS project is striving to tackle obstacles, that are present in energy planning in countries of Alpine Region and focused on creation of a more inclusive environmental framework that would support multi-leveled approach. Hopefully this will pave the way towards more integrated energy policies, not only in Slovenia but in EU in general.